The City of West Melbourne is small – but mighty. One of the fastest growing cities in Florida, the city’s population has grown 33% (and counting) since 2010. Nestled between the cities of Melbourne and Palm Bay, West Melbourne was long looked over, but for its residents, the city is the place to be, providing a small-town feel with world-class amenities just minutes away.

With its growing population, West Melbourne has become one of the hot spots for new residential development. Sawgrass Lakes blends nature with convenience. Miles of walkways between waterways meet with the community center, which includes a fitness center, beach-entry pool, and two-story waterslide. Lifestyle Homes is a Space Coast local builder who provides top-quality builds since 1984. Their newest addition to West Melbourne, John’s Landing is a cul-de-sac community with 24 home sites, each wide enough to fit estate-style homes. These new developments are in addition to brand new luxury apartment complexes all with top-of-the-line amenities.

Along with the small-town feel is the A-rated schools of Meadowlane and the West Melbourne School of Science. For a more intimate grocery shopping experience is Downtown Produce, with its farmers’ market feel mixed with gourmet options. This is just one example of local favorites – other hot spots include Love Bugs Bakery and Cerrato’s Italian Market (so hole-in-the-wall, we can’t find a website). Then for the ultimate convenience is West Melbourne’s Hammock Landing Mall, a 750,000-square-foot, open-air mall with favorites like Home Goods and Target mixed with some mom and pop establishments.

Just like the growing city, the number of high-tech careers near West Melbourne has grown substantially over the last decade. About 10 minutes away in neighboring city Melbourne is Melbourne Orlando International Airport (MLB), which not only hosts a number of commercial airlines (including new Allegiant Air!), but also hosts a commercial park of aerospace, defense and manufacturing powerhouses. The Northrop Grumman Melbourne campus features a premier facility for the development and rapid prototyping of advanced surveillance and battle management systems. Embraer has literally taken off from the Space Coast, with a large campus at MLB including their Executive Jet and Technology centers. Collins Aerospace has had a presence on the Space Coast for over 40 years, and continues to pick up hiring. Thales also has a presence on the campus. And finally, L3Harris‘ corporate headquarters is right across the street, with several facilities in the immediate area.

The beauty of West Melbourne is location, location, location. Easy access to I-95 and MLB is just the cherry on top. West Melbourne is a short drive to Downtown Melbourne, Eau Gallie Arts District, and the beaches of Indialantic and Melbourne Beach. However, in the city itself are some unique gems. The Space Coast Field of Dreams is an all-access, multi-sport park that encourages a meaningful recreational experience for children and adults of all abilities. In addition to this all-access playground, the park holds a community skate park and splash pad and Promise Café and Bakery next to Aves’ Ice Cream. One of the area’s only IMAX theaters calls West Melbourne home and shopping and dining entertainment is just a short drive to Melbourne Square Mall. For a case of the retro-feels there is Game Over Bar Arcade. 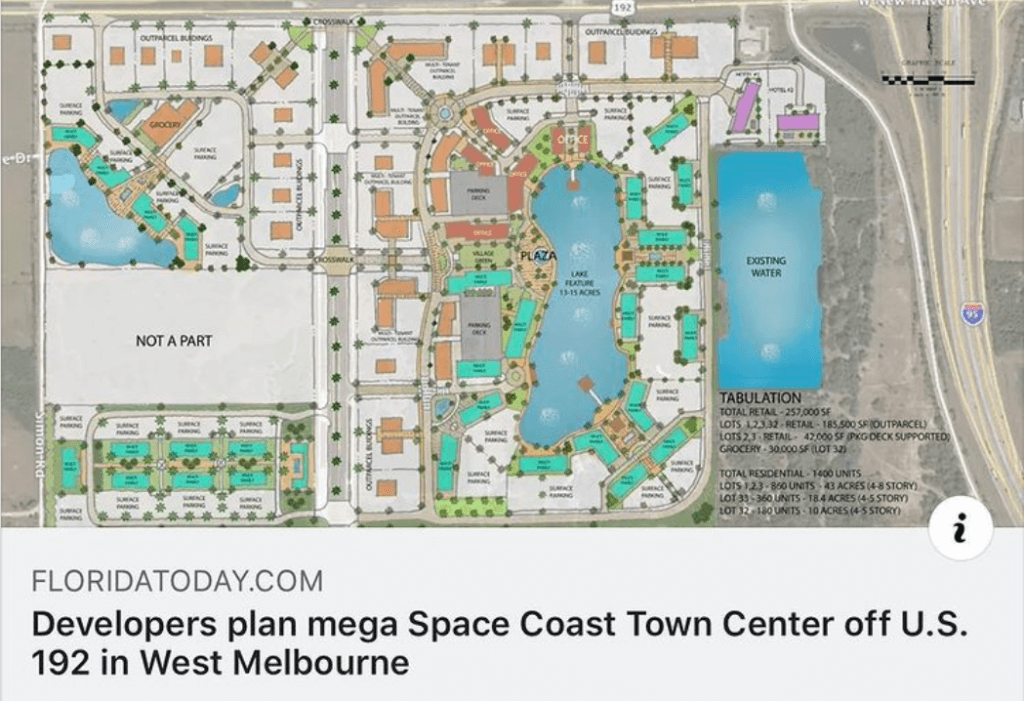 The Space Coast Town Center is currently under construction and will be a neo-urban, walkable community at the heart of the region’s employers and attractions. The first of the residential opportunities at Space Coast Town Center is under construction now, Integra Station will include 300 multi-family units and is scheduled to deliver February 2022, officially bringing this community to life.